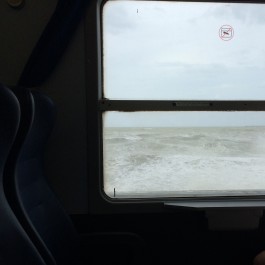 Emotions are there to be felt.
It's so simple and sometimes so difficult.

Emotions create sensations to be felt in the body. That's their thing.
Ideally they come and then they leave. Like a wave.
But for this to happen they need to be allowed to be there, they need to be felt, accepted, and not suppressed. You need to ride the wave.

With some emotions it might be easier than others.
So, what about sadness? Can I also ride the sadness wave, ride on it without falling off, staying on top using its energy without being kept under, without crushing on the rocks?
Some waves seem too big; the water below too deep, the shore too far. But is that really true? Or is it only the anticipation, the projection that seems so scary? What does it really feel like when the feeling is there?
Can feeling sadness be pleasant? Can it be a relieve to breathe with it, allowing the tears to roll, to let out what was stuck inside, for so long?

And what if you don't even know that the emotion is there because you are not aware? How long can one suppress, knowingly or not? Until when?
And what happens if the long suppressed emotion does come out unexpectedly, triggered by some event?
Can you then see this as an opportunity instead of a threat? An opportunity to feel and to discover and to learn?

Having said that, some experiences that happen to us are just shit. And there is no need to glorify these. I don't intend to say that everything is good nor beautiful. Or that one should put oneself under pressure or feel bad if it's too much. But rather that sometimes it's good to feel emotions even if they don't feel pleasant.

take away:
it's good to feel emotions
it's not so good to suppress emotions.
it's worse if you don't even know you are suppressing emotions. 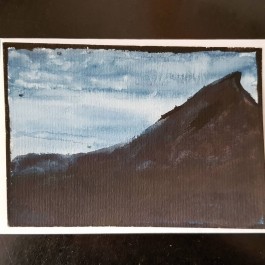 It was my friend's birthday last week.
Instead of presents he asked his friends to reflect on the value of life through sharing their memento mori (an artwork designed to remind of mortality). For me, this resonated a lot.
A small painting is what I shared.
It is part of a series of paintings of water and the sea I drew on heavy, rainy and sad days a few years ago. It reminds me of my darkness and the sorrows I feel. Moments of despair, my pain and the pain around me. And it feels relieving to express it and to look at it.

People around me sometimes turn away when I talk about or show my heaviness.
It is too much for many to feel. It might trigger something and some people don't want to go there. I understand that. It is not an easy place.
But I have learned to see its value. To look heaviness in the eyes. To dive deeply into it. Or at least this is what I try.
In it there is so much potential. Because through the heaviness I can see and appreciate the lightness.

I didn't really choose this path. I was led into it through my experiences in life, which means that I didn't have it easy. I think that if I could have I would have chosen differently. But now I am here and I see it as my task to look at and give space to this deep heaviness.
I went through a heavy depression with strong thoughts of ending my life when I was 12 years old. The experience has marked me deeply. For a long time I pushed away and suppressed these memories and feelings. But they were never gone and started making themselves more noticeable ten years later.
So I was forced to look at them, to invite the heaviness and to dive into these heavy times. I am still in this process. And I have support.
Over the last years I have started to share my story with people around me. To open a door also for others. Because I know that I am not alone.
I see this as a task given to me. And it is such a fulfilling task. 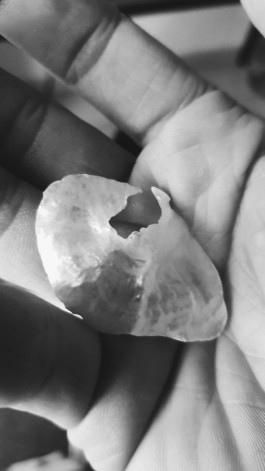 This shell is with me for some years. I touch and look at it to remind myself of the parts of me that are vulnerable and fragile, that break easily. to acknowledge and see their beauty and value.

The shell is hard but if I put pressure on it, it breaks so quickly. it is not antifragile. it will not grow stronger from damage. it is what it is. a shell.
a beautiful shell. It is thin but has many layers. its hardness feels soft. its lightness feels dark. it has dents and fractures. it shines and glitters.

i need this reminder. as i tend to forget. then i don't want fragility to be part of me. Because it can feel like a burden, a big heavy stone, something that is wrong with me, where i don't fit in. A voice in my head wants to push it away. crush and fight it with strictness, plans and rules.
But this does not work. i experienced it since being a child, over and over. And now i am thankful that it does not work. and so i don't have another choice. but to accept and make space for it.
to be kind to it, accept its beauty, its ugliness. or so i try.
because then i can be open and enjoy, this feeling so soothingly subtle, so light.
to know the light
in the darkness

We use cookies on our website to give you the most relevant experience by remembering your preferences and repeat visits. By clicking “Accept”, you consent to the use of ALL the cookies.
Cookie settingsACCEPT
Manage consent

This website uses cookies to improve your experience while you navigate through the website. Out of these, the cookies that are categorized as necessary are stored on your browser as they are essential for the working of basic functionalities of the website. We also use third-party cookies that help us analyze and understand how you use this website. These cookies will be stored in your browser only with your consent. You also have the option to opt-out of these cookies. But opting out of some of these cookies may affect your browsing experience.
Necessary Always Enabled
Necessary cookies are absolutely essential for the website to function properly. These cookies ensure basic functionalities and security features of the website, anonymously.
Functional
Functional cookies help to perform certain functionalities like sharing the content of the website on social media platforms, collect feedbacks, and other third-party features.
Performance
Performance cookies are used to understand and analyze the key performance indexes of the website which helps in delivering a better user experience for the visitors.
Analytics
Analytical cookies are used to understand how visitors interact with the website. These cookies help provide information on metrics the number of visitors, bounce rate, traffic source, etc.
Advertisement
Advertisement cookies are used to provide visitors with relevant ads and marketing campaigns. These cookies track visitors across websites and collect information to provide customized ads.
Others
Other uncategorized cookies are those that are being analyzed and have not been classified into a category as yet.
SAVE & ACCEPT